Hey there Teacups! two posts in one day who would have thought that would ever happen on this blog, I’m playing catch up at the moment as I’ve spent the first few days of September fighting horrible migraines. I get them regularly and they vary in intensity but the ones I’ve had these past few days have been debilitating hence not being able to get the blog posts that should have gone up posted. After today though everything will be back to normal hopefully and I’ll be posting every other day again with a few extra posts thrown in there as well. If any of you have any tips for me in terms of how to help manage migraines, please stick them in the comments as I’ll try anything to either calm them down or rid them.

Enough of me moaning though let’s get into today’s post, I’m back again today with another Let’s Talk Tea post and this time around I’m going to be reviewing Beach House Teas Fog Horn Grey blend. Beach House Teas – Fog Horn Grey is an Earl Grey based blend with lavender, corn flowers and orange peel. You all know I’m a huge fan of Earl Grey blends, so I will admit that when I saw this in the package that Beach House Teas sent to me was excited to try it. I’m not normally a huge fan of blends with lavender in them but with so many blends changing my opinions of certain ingredients recently I had to give this blend a chance and see if it could do the same. 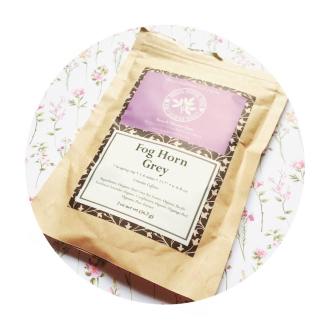 The dry aroma of this blend is quite nice but because of the heavy lavender and bergamot notes it is very perfumed and hard on the notes. I would have loved for the black tea to have been able to come through a little stronger but when paired with both bergamot and lavender there was no chance it would have been to fight against them both and come out on top. I’ve never been a fan of tea blends with lavender in so if I’m being honest I did go into trying this blend worried that, that was going to hinder my enjoyment of this blend overall.

You all know that when it comes to Earl Grey I’m a fan and I always have been but because I’ve been a fan of the blend for so long it takes a lot for a blend to wow me as much as others have in the past. I went into trying this blend with an open mind and I thought that maybe this would be the blend that changed my opinions on the use of lavender as an ingredient in tea blends and I was incredibly hopeful that it would but sadly it didn’t the lavender used in the blend is far to strong and as is the bergamot element which means the tea and orange peel hardly got the chance to come through at all. The black tea used for this blend seem to be of quite a decent quality and had the whole blend been a bit better balanced and there as a lot less lavender and bergamot it would have been able to shine a little brighter. I got an ever so slight malty note at the back of my mouth that I would have loved to have been stronger and much more present in the overall flavour profile.

It’s got quite a dry mouthfeel which I was honestly expecting because bergamot is incredibly drying, and lavender can be as well so with the two of them being used in this blend there was no doubt about the fact it was going to be drying in the mouth. I’ve tried this both hot and iced and it’s much more palatable when its iced because it seems to balance everything out a little more the lavender is still strong as is the bergamot but the flavour is not being forced out of them like it would be when steeped with boiling water so it’s much lighter and actually quite naturally sweet. It’s not a blend that I would reach for over other Earl Grey blends but its nice iced, so I’ll still get some use out of it over the next few months. If I were to make any changes to this blend I would hold back a little on the lavender and bergamot and add a little more orange peel I feel like I would have enjoyed this blend much more if it were a little better balanced.

I would also make a change to the ingredients list on the packaging. It’s a small thing to pick up, but the tea is listed as ‘Organic Earl Grey Tea Leaves’ and while I know that most people wouldn’t notice this I did and I’m sure that other tea lovers would probably do the same. I understand that the blend is an Earl Grey inspired blend, but the tea leaves used aren’t Earl Grey tea leaves because Earl Grey tea leaves don’t exist. I love to be able to know where the tea in the blends I drink is from and I’m sure that most other tea lover probably want to know the same. So maybe changing that would be a good idea just to give customers a little more of an insight into the blend they are purchasing. I understand that it’s an honest mistake to make but I picked up on it straight away and I know that others will as well.

Overall Teacup Rating: 3.5/5 | As I always say just because this particular blend wasn’t my cup of tea doesn’t mean it won’t be yours so don’t let my opinions or overall teacup ratings stop you from trying this tea. You never know you might love it and I don’t want my opinions to be the reason you don’t give it a chance.

If you want to find out more about Beach House Teas and purchase some of this blend for yourself, you can do both here. As always if you have any questions at all either stick them in the comments or send them to me on Twitter/Instagram @teaisawishblog and I’ll answer them all as soon as I can.