Hey there Teacups! Happy Matcha Monday can you believe it’s October already this year really has gone by so fast. I’m back today with another Let’s Talk Tea post and this time around I’m going to be reviewing Pure Chimp’s – Lemon Matcha. (Another perfectly time post for #matchamonday I know). If you’ve been reading my blog for a while now, you’ll will have read my first post featuring Pure Chimp last month (if you haven’t read that post you can find it here). From that post you’ll know that I loved their original Matcha in fact I loved it so much that I even said it was one of, it not the best Matcha I’ve ever tried. So, when the time came for me to try one of their flavoured matchas I couldn’t have been more excited.

Before opening the jar that this Matcha is in I was a little bit worried that the lemon notes were going to be too strong an overpower all the Matchas best qualities, but I was most definitely wrong. While the lemon notes are quite strong they don’t overpower the Matcha at all and together they create such a refreshing aroma. 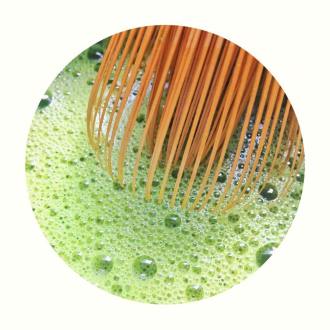 Having read some reviews of other lemon matchas before trying this one and seeing that a lot are very overpowering and sour I was really worried that this was going to be the same but it is far from that. The lemon notes are strong but rather than overpowering the sweet, vegetal creamy Matcha it just pairs with it excellently and make for an incredibly refreshing cup. The Matcha use in this blend is the same used in their original one and I loved it just as much this time around as I did the first time I tried it and I still stand by the fact that it’s probably the best Matcha I’ve ever had. This is one of the only lemon flavoured Matchas out there that I could find that uses a natural ingredient to flavour there Matcha which is why I think it’s so well balanced and nowhere near sour.

Froth wise initially it held quite a good froth but it didn’t last for too long (unlike their original Matcha) I can only assume that is because of the added lemongrass as it seems to be the running theme of the flavoured Matchas I’ve tried. Matcha just doesn’t seem to want to hold a froth for long periods of time after you add other things to it. I can’t mark pure chimp down for that though as I know how much of an amazing froth that Pure Chimp’s original (unflavoured) Matcha holds. What I did notice about this Matcha is just how light in colour it’s froth it turned such a creamy green colour as if I had added milk which shows just how naturally creamy this Matcha actually is.

Overall I really enjoyed this Matcha and I’m really thankful that I’ve been given the chance to try it. I think this will make for both a great iced Matcha and also a great lemon cheesecake Matcha latte. So I’m going to experiment with this over the next few weeks and see how many different things I can do with it. I now can’t wait to see what the other two flavoured Matchas Pure Chimp sent are like, if they are anywhere near as good as this one I’m in for a treat.

If you want to find out more about Pure Chimp and buy their Lemon Matcha for yourself, you can do both here. As always if you have any question at all either stick them in the comments or send them to me on Twitter/Instagram and I’ll answer them all as soon as I can.