Hey there Teacups! I hope you’re all doing well with christmas getting closer I’m drinking more and more chai/chai lattes every single day so with that in mind I thought today was the perfect day to review a Masala Chai I was very kindly sent by the team over at Hope & Glory Tea. If you’ve been reading my blog for the last few months you’ll know that I’ve loved pretty much everything i’ve tried from Hope & Glory Teas so I couldn’t have been more excited to try their masala chai blend. I’m a self confessed chai addict and I wanted to see whether or not it would stand up my taste test and make it into my top 10 or top 5 list. 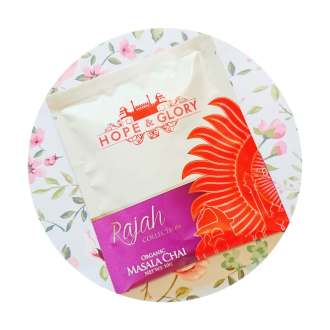 Here’s what Hope & Glory Tea have to say about this blend on their website: ‘’A full-bodied blend of organic Ceylon black tea and spices, Masala Chai derives from the Hindi literally meaning ‘mixed-spice tea’. Spices such as cardamom and cinnamon have been expertly blended to give a warming, rich blend of flavours and a sweet aroma. Can be served with or without milk. However, why not serve in the traditional manner and steep in a simmering pan of milk and water for 5-10 minutes before straining into a cup or teapot, adding sugar as required’’ 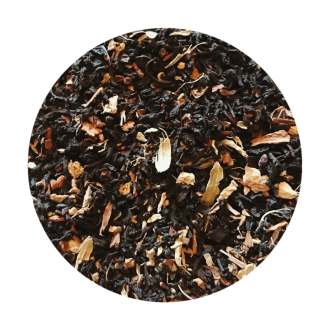 The leaves of this tea are very small and look to me to be CTC leaves, I’ll be honest I was expecting better quality from Hope & Glory and knew straight away that I was going to have to steep this for a much shorter amount of time than I would a whole leaf/ large leaf blend. The packaging suggests steeping this for 4-5 minutes but with a tea with such a small surface area steeping for that amount of time would result in quite a bitter cup. Aroma wise surprisingly the ginger and the cloves were the stand out notes with hardly any cinnamon coming through at all. After I left it to acclimatise for a few minutes an ever so slight malty note from the Ceylon came through but other than that not much. My first impressions of this tea were clouded by how unbalanced this blend smelt to me.

So as I mentioned before with this tea being so broken and small I knew it wasn’t going to need as long a steeping time as 4-5 mins with such a small surface area it would end up astringent and bitter and I wouldn’t be able to drink it. But nevertheless I followed the instructions on the packet to see how it turned out.. While doing that I also steeped up a version within my own parameters to see which one I enjoyed more and to see whether or not I was wrong about this tea. I wanted more than anything for this blend to prove me wrong and I honestly did want to end up enjoying it my first impressions however did not give me much hope.

My first steeping with this blend (following the instructions on the packet) did not work out very well. Within just three minutes the liquor when from a golden brown to a very dark brown and from that alone I knew it was going to be far too strong, astringent and bitter for me but i carried on the steeping up until four and a half minute didn’t add any honey and jumped right into taking my first sip. I was right to have been cautious about brewing this broken blend for so long because my first sip was so incredibly bitter and the spices were completely drown out by how strong the black tea was this was undrinkable for me to the point where adding milk and honey didn’t help. I would suggest completely ignoring the suggested steeping time on this packet and if you are going to drink this blend on it’s own to only steep it for three minutes at the most. 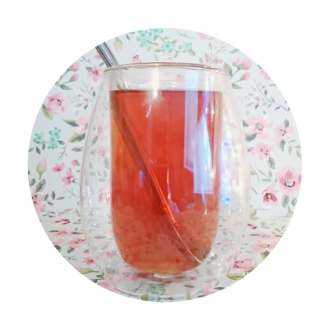 After being so disappointed with how my first cup of this tea turned out I set to steeping it again but this time changing the steeping time making it much shorter and hoped that it would result in a much less bitter and well balanced cup than the first steeping did. This time around I steep for two and half to three minutes and the resulting cup was a golden brown in colour and was much less bitter than the first cup which enabled some (but not all) of the species to come through. However the spices in this blend were nowhere near strong enough for me and when I have a masala chai I like the species to come through just as strong as the tea.

The only species that were able to come through were the ginger, the cloves and the cinnamon (ever so slightly). All in all I just didn’t enjoy this blend very much either way I stepped it, it just didn’t stand up to other excellent chai blends I’ve had in the past. For people new to chai this would probably be a good place to start but if you are a seasoned chai drinker I wouldn’t recommend this. Remember though like I always say though just because a certain blend may not be my cup of tea doesn’t mean that it won’t be yours, so don’t let my opinions stop you from giving this blend a try. You never know you may end up really enjoying it. .

If you want to find out more about Hope & Glory Tea and purchase their masala chai for yourself, you can do both here . As always if you have any questions at all either stick them in the comments or send them to me on Twitter/Instagram @teaisawishblog and I’ll answer them all as soon as I can.