Hey there Teacups! I’m back today with another Let’s Talk Tea post and this time around I’m going to be reviewing LibberTea’s Indecently Indulgent – Chocolate & Coconut Black Tea blend. You all know me well enough by now to know that not only do I love Black Tea but I also love chocolate and coconut paired together so when I saw that LibberTea had included this blend in the package of teas they sent I couldn’t have been happier. There were lots of other samples in that box with strong aromas that this blend had to fight against but it stood its ground and despite being at the bottom of the box it was the first thing I smelt and from that moment I was intrigued to see if it was going to be just as amazing in taste as it was in aroma. 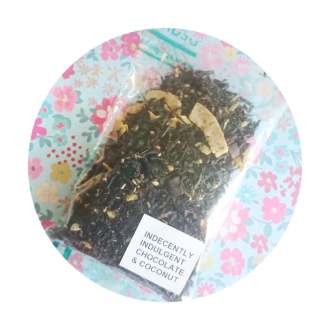 Here’s what LibberTea themselves had to say about this blend on their website: Caribbean music, white beaches and crystal clear water – this tea stimulates the senses to deliver pure happiness. Full of tender and creamy notes this tea will leave a warm smile on anyone’s face.

As I always say when it comes to chocolate teas they are either a hit or a miss and there is no in-between (though I’ve had a few great ones recently so I’m on a bit of a roll) so when it came time for me to finally try this blend I was a little bit nervous that it was going to be yet another chocolate tea that was going to be a complete miss but I was wrong and this blend is actually phenomenal and it’s one of the best chocolate black tea blends that I have ever had. The chocolate (both milk and white) is deep, rich and creamy. The coconut notes comes through but it’s mostly in the aftertaste for me.

Black  tea was the best choice as the base for this blend and its heavy malt and somewhat nutty notes are by far the stand out notes. The middle note it very much all chocolate milk coming through first and then the white follows adding a nice creaminess to the mouthfeel. I’m a little bit sad that the coconut only came through in the aftertaste for me but glad that it was present and that it became a little stronger as the tea cooled. 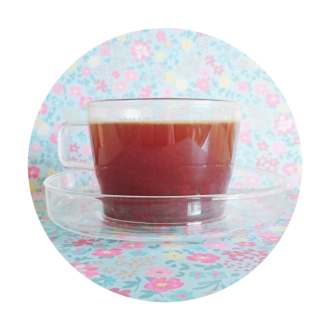 For this tasting session I had this blend on its own with no added sweetener or milk to see what it was like and its safe to say that you really do not need to sweeten this blend it’s naturally rather sweet and I think adding anything else to it would just throw it off-balance. Since doing this tasting session I’ve also used this blend to make a latte and while it was delicious on it’s own it was phenomenal as a latte and the creaminess of the chocolate was made even stronger and even the coconut seemed to come through a little bit more. The natural sweetness was a little muted when I added the milk so I did add a little bit of honey just to bring that element back a little bit. It’s nice both ways but I think when I do order some more of this blend I’ll be using it specifically for lattes.

If you want to find out more about LibberTea or buy some of this delicious blend for yourself you can do that here and as always if you have any questions at all either stick them in the comments or send them to me on Twitter/Instagram @teaisawishblog and I’ll answer them all as soon as I can.