Hey there Teacup! I’m back today with another Let’s Talk Tea post and this time around I’m going to be reviewing Totem Tea’s – Cinnamon Squirrel Blend. This blend is a red rooibos based blend inspired by homemade apple pie. Now I’m sure you all know me well enough by now to know that I’m not a huge red rooibos fan so when I opened the package and saw that they had included this blend in there I was a little bit hesitant about trying it in case the rooibos was too strong for me but I’m doing my best to push myself out of my tea and tisane comfort zone this year. So instead of leaving this until last and trying their other blends first I pushed myself to make it the first one I tried and the first one I posted about and I’m very glad that I did.

Before I get into the rest of this review I just want to take a second to talk about how adorable, unique and quirky Totem Teas packaging is. They have the most ‘me’ tea and tisane packaging I have ever seen seriously just look at how cute it is! Each one of their tea and tisanes packaging and name is themed around an animal and the amount of thought and detail that goes into each packaging design is phenomenal. It’s some of the best/ well thought out and designed packaging I have seen since I started drinking tea. I can’t wait for Totem Tea’s new releases to see what other animals are going to appear. (The fact that the packaging contains zero plastic is an added bonus as well)

Here’s what Totem Tea have to say about this blend on their website: This high quality caffeine-free rooibos has been blended with real pieces of apple and cinnamon sticks. Just like a scrumptious home-made baked apple pie in a cup! freshly hand prepared for optimal scent and taste.

As I said towards the start of this post I am not a huge rooibos fan so going into this tasting session I was a little bit worried that the red rooibos base of this blend was going to be too much for me and completely overpower the cinnamon and apple but I was completely wrong. The apple added such a perfect amount of natural sweetness that it was able to balance out the rooibos taking away the almost alcoholic essence red rooibos has sometimes and calm down it’s malty, tobacco flavours allowing hints of  dried cherries, vanilla to come through. The cinnamon and apple pair perfectly with the rooibos and together they manage to recreate the flavours of a home made baked apple pie perfectly. Normally with red rooibos I have to add a little bit of honey to make them a little more drinkable for me but because of the apple in this blend providing such a great amount of natural sweetness I didn’t need to do that and I was so happy about it. 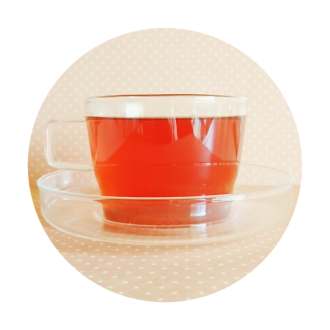 Me being me I just had to try this as a latte and while it works well as both a hot and iced latte as the oat milk adds a ice cream like note to it and it makes for a great dessert replacement. However for me the milk drowned out a lot of the more subtle notes of the rooibos so I probably won’t have this blend as a latte very often. When I first read the ingredients list of this blend I was shocked to see that it had liquorice root and fennel in it as I wasn’t particularly sure what either would add to a blend like this but the fennel especially adds a almost savoury note that cuts through everything else in this blend and calms the sweetness but a little bit. The savoury not provided by the fennel reminded me a lot of cream cheese and it makes the overall mouthfeel quite soft and creamy. Overall I really enjoyed this blend and its honestly one of only a few red rooibos blends I would repurchase and keep in my tea ‘stash/collection’ for a long time to come.

If you want to find out more about Totem Tea and purchase some of their Cinnamon Squirrel blend for yourself, you can do both here. As always if you have any questions at all either stick them in the comments or send them to me on Twitter/Instagram @teaisawishblog and I’ll answer them all as soon as I can.