Hey there Teacups… Happy Matcha Monday! I’m really enjoying doing Matcha Monday this year and I’m hoping that I’ll be able to keep up with it and keep it going all year long. For todays post I’m going to be reviewing Adagio Tea’s – Cinnamon Apple. Truth be told it’s actually been a little while since Adagio (UK) very kindly sent me these teas but as you all know throughout 2019 my health wasn’t the best (lets just put it that way) and I didn’t get to review as much as I wanted to and I had to put a lot of things on hold.

So throughout 2020 I’m (hopefully) going to be reviewing two of the teas Adagio sent me a month until they have all been reviewed. Adagio are one of my favourite tea companies so I’m incredibly thankful that they even sent me any teas in the first place. So I’m determined to get them all reviewed as soon as possible. 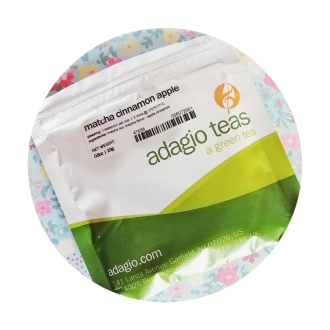 Here’s what Adagio Teas have to say about this Matcha over on their website: ”High grade Japanese Matcha with a hint of fruit and spice! Our Cinnamon Apple Matcha is a great rainy day tea, a hug in a cup! Grab your favourite book and curl up with this sugar-free, caffeinated delight. This comforting Matcha blend has all the energy of an espresso, without the come down. Drink straight or add a touch of milk for a luxurious Cinnamon Apple Matcha latte. This is a Samidori cultivar from Uji, Kyoto, flavoured with natural cinnamon and apple. It is a high-grade Spring (first harvest) tea. The 2oz tin will make about 24 8oz servings.”

Throughout 2019 I tired a lot of flavoured Matcha and by now you would think that I would be tired of them but I honestly get so excited to try new ones and this one was no different. I had seen a few of my American tea friends try this and review it and they all had so many great things to say. I asked a few of them how they thought I should prepare it for this tasting session and they said to try it on it’s own but to also make sure I try it as a hot latte so I look their Advice and I did both.

I love Matcha both on it’s own and as a latte but I would say that I do drink it as a latte most of the time so when I try new matchas I always like to make sure it ill work as a latte as they is how I will primarily drink it going forward, it also helps me give you all a much more well rounded review. One thing a lot of companies get wrong when it comes to flavoured Matcha is that they over flavour them and its all added flavour and no Matcha so I was a little but nervous going into this tasting session but I shouldn’t have been at all.

In the packet this Matcha gave off a mostly cinnamon aroma with a subtle sweet apple note and of course a hearty vegetal note and luckily it was exactly the same taste wise. For me that’s what I want from a flavoured Matcha, I want the Matcha to be the star of the show and the added flavours to come after that but I also don’t want either to overpower the other, the apple could do with being a little bit stronger but all in all this is really well balanced and Adagio have really hit it out of the park with this one. This is the first flavoured Matcha that I’ve had from Adagio and I couldn’t have started with a better one. 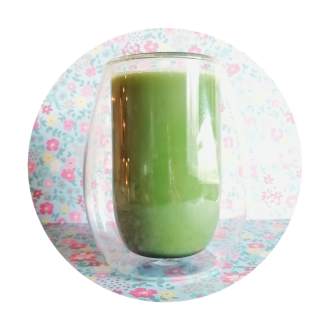 The Matcha used is definitely of a great quality and it makes for quite a dark green cup which I wasn’t expecting as the Matcha powder was quite a bright green. As with most flavoured Matchas it was much harder to build a good froth but that’s only to be expected. I’ve never been able to build a good froth with a flavoured Matcha it just never works. It is quite vegetal and does have some grassy notes to it but, the cinnamon adds a nice subtle sweetness as does the apple so it all balances out quite naturally. It’s really nice on its own (but I suggest adding a little honey) and it’s delicious as a latte. Something tells me this would also be great with hot apple juice so I’m going to try that asap. I would definitely buy this again and make it a staple part of my collection.

If you want to find out more about Adagio Teas and purchase some of this Matcha for yourself, you can do both here. As always if you have any questions at all either stick them in the comments or send them to me on Twitter/Instagram @teaisawishblog and I’ll answer them all as soon as I can.

*The Tea featured in the post was gifted to me for the purpose of this review. All opinions are my own and have not been paid for*