Hey there Teacups. I’m back today with another Let’s Talk Tea post and this time around I’m going to be reviewingTeakruthi’s – Cinnamon Chai blend. It’s been a while now since Teakruthi have featured on my blog and I’m so happy to be tasting and review their blends again and considering how cold it is here in the UK now I couldn’t think of a better time to review their Cinnamon Chai. I’ve really enjoyed Teakruthi Chai blends so far in fact I think I’m pretty hooked on their Majestic Chai that I reviewed recently so going into this tasting session I was hoping that this chai would be just as great as that one was. 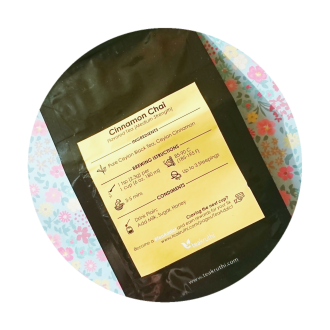 Here’s what Teakruthi themselves have to say about this blend over on their website: ”Our Cinnamon Chai blend is a combination of two of our favourites: Low grown black tea and pure Ceylon Cinnamon. Hand-plucked at an elevation between sea level and 600m, this tea is heavy and robust; it offers a spicy, fresh flavour and is gold in colour. Ceylon Cinnamon, indigenous to Sri Lanka, is the best of its kind—in fact, it’s known widely as the only “true cinnamon,” or “real cinnamon.” Cinnamon grown in Sri Lanka has a popular reputation on the market for being unique and possessing quality colour, flavour, and aroma. This tea is truly a unique drinking experience for all Chai drinkers. 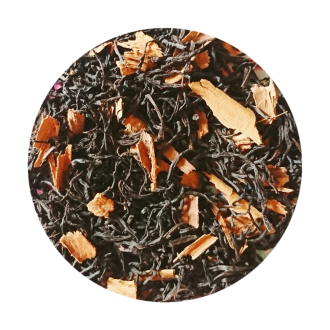 Just like Teakruthi‘s Majestic Chai this blend is quite simple when it comes to it’s ingredients. But sometimes when it comes to tea simple is best and when it comes to Teakruthi blends that is deffinelty the case. The Ceylon base is malty and woody like you would expect but it also has a subtle citrus note that tastes like a mixture of orange and lemon zest and that’s one of my favourite things about the Ceylon that Teakruthi for their blends like this. The cinnamon pieces are big but because they are whole they give off a subtle cinnamon that doesn’t overpower the Ceylon but it still present and noticeable which is what I blend like this should be like.

I was so glad to see bit cinnamon pieces when I opened the bag of this tea that I was sent because I’m so sick of chai blends that use powered cinnamon, cinnamon flavouring and small cinnamon chunks it’s just not the same at all and they give off a cinnamon note that is always far to overpowering or artificial and it always over powers the rest of the notes in the blends. You can clearly taste the difference in blend like this and I for one would rather have a blend in which I can actually taste the tea and it’s subtle notes that round off each mouthful perfectly. This was such a smooth tea to drink and wasn’t trying in the mouth at all because and there wasn’t an ounce of astringency to it. 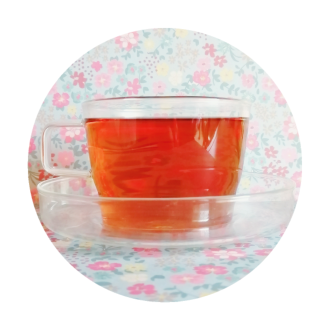 I’ve now tried this blend as a latte and I have to say that as nice as it is as a latte, I actually prefer this without milk! It does need a little bit of honey though but only about half a teaspoon. It just amplifies the cinnamon a little bit and just made this blend even better. You can have this with milk and it does make a great latte but some of the subtler notes of the Ceylon are deffinelty lost and you do have to use double the amount of tea you would normally. I’ve had quite a few blends recently that have been very simple in terms of ingredients but honestly they have all been some of the best blends I have had in a while.

Because so many of the blend I try are jammed packed with so many different ingredients these simple blends that I have every so often really stand out and I think because I don’t have them all the time I just end up enjoy them a lot more. On the day I did this tasting session I made a cup of this and then during the rest of the day I used all of what was left in the bag because I just couldn’t stop drinking it. This is deffinelty a blend I will repurchase in the future because along with the majestic chai this has been a breath of fresh air for me.

If you want to know more about Teakruthi and purchase some of this blend for yourself, you can do both here. As always if you have any questions at all either stick them in the comments or send them to me on Twitter/Instagram @teaisawishblog and I’ll answer them all as soon as I can.

Speak to you all again soon. Happy Steeping. -Kimberley

*The Tea featured in this post was gifted to me for the purpose of this review. All opinions are my own and have not been paid for*