Hey there Teacups! I’m back today with another Let’s Talk Tea post and this time around I’m going to be reviewing Adagio Teas – Spiced Apple Chai. As you all know I am a huge Chai both traditional masala chai and chai blends with a twist so when I saw this on the UK Adagio website I knew I had to try it so when they asked me to pick some blends out to try I knew this had to be one of them. I’m sad that it’s taken me this long to finally get round to reviewing it as this would have been a great post for last autumn but sadly my health got in the way last year so I had to wait until I could fit it in to my 2020 posting schedule.

As you’ll all know I shared my current top 5 chai blends a the end if February and going into this tasting session I was eager to see if this blend was going to knock any of those out of their spot and take its place. My top 5’s don’t tend to change often but every once in a while a blend comes along and it’s simply so good that I have to give it a spot in my top 5. I’ve tried a few new chai’s this year so far that have been tasty but non of them made it into my top five…However this blend from Adagio has done just that… but you’ll have to wait until the end of this year to see which spot I’ve given it in my top 5.

Here’s what Adagio themselves have to say about this blend over on their website: ”Our Spiced Apple Chai blend features the timeless, comforting combination of apples and spice. A lively mix of black tea, classic spices from Indian masala chai and bright notes of crisp apple. Juicy and pleasantly sweet, like warm applesauce, with a clean, refreshing texture. A delight for the senses.” 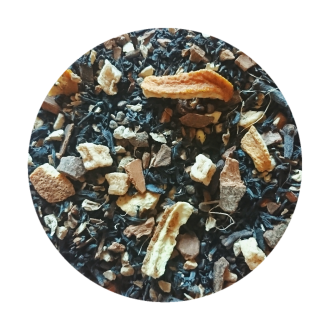 Not only do I love chai but I am also mad for anything that has the combination of apple and cinnamon its deffinelty one of my favourite flavour combinations and I was excited to see it used in a tea because it’s not something I have seen a lot of companies do. Upon opening the sample packet I was hit with such a delicious aroma it was heavy on the cinnamon, ginger and cloves and had a malty underpinning from the black tea based used it smelt just like Christmas. I was a little bit worried that I couldn’t really pick out the apple in the aroma because it was heavy on the spices but luckily it was much stronger in the taste than it was in the aroma. I’ve never had spiced apple cider that is popular in America but I can imagine that this is exactly what it tastes like.

This is actually the completely opposite of what I thought it would be I thought the black teas notes would have been the thing that stood out the most in this teas flavour profile but it was actually much more of a slight malty underpinning than anything else. The spices and the apple are the stand out when it comes to this blend with the black tea being a bit of an afterthought and I think had it have been the other way round this blend would not be anywhere near as amazing as it is. in terms of spcies the cinnamon and the ginger and cloves were the strongest.

As a cardamom lover I would have loved to have loved to have been able to pick out the cardamom a bit more but that’s just my personal taste and I could make that note a bit stronger by adding some cardamom myself. I’ve only had this blend hot and honestly I wouldn’t suggest having it any other way, this would not work at all iced and adding milk would completely ruin it. I thought this would have been sweet enough with the apple that I wouldn’t have, had to add any honey but sadly I did have to just to calm down those spices a little bit. But for most people who don’t have an insane sweet tooth like I do this will probably be sweet enough and you won’t have to add anything at all.

I hope the UK adagio site continue to stock this blend because it’s deffinelty one I would purchase time and time again. It will no doubt once my tea buying ban is over because a staple in my collection.

If you want to find out more about Adagio Teas and purchase some of this Chai for yourself, you can do both here (for the UK) and here (for the US). As always if you have any questions at all either stick them in the comments or send them to me on Twitter/Instagram @teaisawishblog and I’ll answer them all as soon as I can.

*The tea featured in this post was gifted to me for the purpose of this review. All opinions are my own and have not been paid for*